For as long as alivers have been peddling their wares, one of their go-to pieces of "evidence" has been the story of a man resembling Elvis Presley, but going by the name of "Jon Burrows," purchasing a ticket to South America (Buenos Aires) at the Memphis International Airport (MIA) on the afternoon of August 16, 1977.  There has never been any evidence offered as to who witnessed this ticket purchase, how this witness knew the purchaser's name was "Jon Burrows," nor how this witness knew the particulars of the ticket purchase.  But who cares about the facts, right?

In Elvis Decoded, a trusted source provided me with information indicating that no international flight tickets were available for purchase at MIA in 1977, but I want to post the response I received recently from a representative of the airport to add further clarity and weight.  In a response to my inquiry as to whether an international flight ticket could be purchased at MIA in 1977, the representative stated: 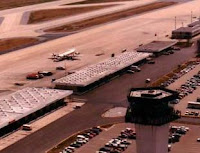 Patrick Lacy
In addition to his never-ending Elvis research, Patrick Lacy has consulted for VH-1 and The Family Channel on two Elvis-related programs ("Rock and Roll Record Breakers" and "The Presleys"), assisted on various Elvis-related projects over the years, appeared on TV and radio and in print interviews, written for the Committee for Skeptical Inquiry, and (no longer) volunteers as an Elvis expert at AllExperts.com. Currently he is working on further Elvis research.

Patrick Lacy can be contacted at elvisdecoded@aol.com.