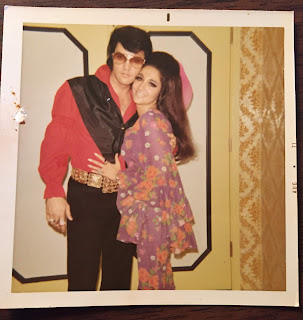 So Elvis Presley gets into an argument about his spending habits with his father and wife, and exits the property en route to the Memphis International Airport.  From there, he gets on a plane bound for Washington DC to meet up with Joyce Bova, a woman he had met in Las Vegas a year prior, and with whom he was not really having a relationship (at that point), but neither had the relationship ended.  More like Elvis was in the dog house, and this impromptu trip to Washington would kill two birds with one stone:  get the hell out of Dodge, and give him an opportunity to apologize to Joyce for past bad behaviors.  And Elvis was off to DC.

Most accounts, from friends and associates of Elvis’s, then tell us that he chose Washington as his destination because he wanted to meet Nixon; others don’t really tell us the initial reason Elvis jumped on a plane.  And at least one confidant says that Elvis boarded a plane headed to DC because that was the first flight out of Memphis.  Because that’s what Elvis Presley would do, with no cash and no luggage:  travel to a distant city for no reason…just grab whatever flight is available.

So why *did* Elvis go to Washington on Saturday, December 19, 1970?  Was the reason so that he could meet with Nixon and get the coveted Bureau of Narcotics and Dangerous Drugs (BNDD) badge?  Or an FBI badge?  Was it because it was the first flight out of Memphis, and upon checking into the Hotel Washington and realizing he had no reason to be in DC he checked out and flew to Los Angeles?  (“Damn, why am I here?”)  Or was there a different reason altogether, one that no one seems to pay much attention to?

Did Elvis travel to DC to see a woman?

Was this woman Joyce Bova?

Didn’t she go public with this a long time ago?

So why is this so difficult for folks to figure out?

Joyce Bova met Elvis in Las Vegas in 1969, and had a 3-year relationship with him that geographically spanned Las Vegas to Memphis to Washington DC.

Joyce Bova was never kept a “secret” by Elvis.

She wrote a book about her relationship with Elvis that was published in 1994.  As far as I know, pretty much everyone who has written about the Washington DC trip tackled this difficult subject *after* 1994…and yet they missed Joyce’s book?  They didn’t know the reason Elvis picked Washington of all places to travel?  They assumed that Elvis had a fight with his father and his wife, and stormed out of the house, and jumped on a plane, and said to himself, “I will write a letter to Richard Nixon so that I can meet him when I get to DC…oh, wait, it’s Saturday, so I will wait until Monday morning to deliver my letter, and will find some other way to spend my time until then”?

Here are a few facts:  Elvis Presley traveled to Washington DC on Saturday, December 19, 1970, to meet up with Joyce Bova, with whom he was having a relationship that was, at that time, hanging by a thread due to Elvis’s behavior in Las Vegas shortly before.  He arrived in DC and checked into the Hotel Washington.  Not knowing how to locate or contact Ms. Bova, he went to the airport (not checking out of the hotel, indicating his intent to return), flew to Los Angeles, then returned to DC late Sunday night for an arrival early Monday morning.  What happened on Monday morning?  Joyce Bova would be back at work at the House Armed Services Committee in the Rayburn House Office Building, where and when Elvis could more easily find her.  The idea to meet with Richard Nixon was something that came to Elvis on the flight back to DC early on the twenty-first, it was *not* the reason he went to Washington DC.  It was an idea that popped up because he wanted a federal badge for his collection, and there was a Senator (George Murphy of California) on board the aircraft.

That’s all it was.

Who cares why he went to DC?

The fact that Elvis Presley visited with Richard Nixon in the Oval Office is the Big Story here, and it is the surreal nature of this story that leads people immediately to the meeting while leaving out the before and after.  And that is fine, and perfectly understandable.  But, I believe it does matter that facts are in their proper place and that context helps shape the story.  To that end, it appears that Joyce Bova was not the secondary thought that weekend, Richard Nixon was.

Another interesting questions comes to mind:  if Elvis traveled to DC and then to LA with no luggage, as noted by at least one eyewitness, then we can assume that anything he had on the plane with him en route to DC from LA (early Monday morning) would have come from his house in LA, where he and Jerry Schilling spent time before boarding the plane back to the east coast.  In his letter to Nixon, Elvis writes that he has a gift for the President, but he doesn’t mention what it is (it’s a gift, after all).  We learn later that Elvis gave Nixon a commemorative pistol, a chrome-plated Colt .45 with the inscription:  “WWII Commemorative European/African Middle Eastern Theatre, December 11, 1941 – May 7, 1943.”  There is also an inscription naming several areas of battle, notably Sicily, Italy.

Now, when Elvis got on the plane headed back to DC, logic tells us that he had this pistol with him, in its case.  He mentioned the gift in the letter he wrote on that very same plane, headed to DC.  But when he boarded the plane, he had not yet come up with the idea to write the letter to Nixon, so the question must be asked:  Why did he have that pistol with him en route to DC before he intended to give it to Richard Nixon?  Who was the pistol originally intended for?

Joyce Bova, perhaps?  And the inscriptions on the pistol…Joyce was born on December 12, and her family is from Sicily.  (One day off, but still.)  A gift Elvis would give based on the date and location inscribed on the gun?  Sounds just like something he would do.

Patrick Lacy
In addition to his never-ending Elvis research, Patrick Lacy has consulted for VH-1 and The Family Channel on two Elvis-related programs ("Rock and Roll Record Breakers" and "The Presleys"), assisted on various Elvis-related projects over the years, appeared on TV and radio and in print interviews, written for the Committee for Skeptical Inquiry, and (no longer) volunteers as an Elvis expert at AllExperts.com. Currently he is working on further Elvis research.

Patrick Lacy can be contacted at elvisdecoded@aol.com.